Laracroft and the Korsnäs Raiders!

I had the holiday of my dreams this New Year's. A crocheter's dream! I was allowed to teach 2 groups of utterly delightful fibrephiles. I was treated like royalty and generally made much of.

Mostly I coughed at them. I think I might have shown them how to do lined jacquard, between hacking attacks. The day after arriving in Toronto I developed a hideous cold, which I suppose I then shared with everyone I met. Even so, they were very nice to me!

I could kick myself for not taking pictures of the 2nd class. Anyways, I'll start with the first one.
So, the thing about Toronto is that you find the most amazing shops in strip malls. This class was held in one of the most beautiful LYS I've ever been to, Spun Fibre Arts in Burlington, Ontario. This is one very classy LYS. I could have spent days there. It could easily be on some fancy New York Avenue, in fact I doubt if any Avenue in New York can boast a LYS like this. But no, it's in a freezing cold strip mall in Burlington. And despite being in a freezing cold strip mall in the middle of nowhere, it has a lively clientele, and it's no wonder why. If I had been given one more day, I would have taken the GO Train out there just for the chance of seeing it again. I won't tell you the real names of all those girls, just the Ravelry names ( data protection etc). From left to right, those are bjross, isobel, feyrhi (who finished a cowl in lined jacquard!), moi laracroft, jeaniex, ruthknits, spun (another Danielle like me, and the shop's brilliant owner!) and her delicious baby girl in the best ever crocheted booties, and finally, off to the side ever so modestly, so far off that I can't even get her to fit in the blogger format, is Chatouille, but Chatouille doesn't count, being in another category. She's actually an angel and I will shortly dedicate a small basilica to her.
Then a couple of days later I was invited to give a class at a LYS in Toronto called Passionknit. But the shop itself was being used for something else on the night in question, so Tamaralda who is one of its two vibrant managers, had us all over to her home where we crocheted around the dining room table. Tea, homemade spiced nuts, jolly fire crackling in hearth...castanet playing...I should have paid them for the evening!

I did not take any pictures. I just coughed at them with great abandon. (Finally the only cure was to step out and smoke a cigarette in the snow. Works every time.) I didn't even get all their Ravelry names. But they were really very, very accomplished craftswomen. One woman in particular, I'm afraid will be teaching me crochet jacquard by the next time I get to Toronto. Not surprising I suppose, being one generation older, and Latvian!

So...anyways...this Tamaralda is a live wire and as obsessive once she gets her hands on a craft as I am. She stayed up till the wee hours practicing, analyzing stitch structure, and planning further projects, and I swear she hasn't stopped yet. And she and her equally vibrant colleague Alisamcr came up with this crazy idea to start a Laracroft crochet group! I was tickled pink at the chance to keep up contact with all my new crochet cronies, so we've dubbed the group "Laracroft and the Korsnäs Raiders" and officially inaugurated it on Ravelry. I have to come up with a design for the banner, ISO good pics of Angelina Jolie w/guns. I love my group, it sounds like a rock band.

For all this and more, thank you so much Chatouille.

I could go on and on about my classes in TO but actually I have to be up early to meet with the Municipal Engineering Dept. about the upcoming Fire Drill at my school.

In their Natural Habitat

Namely, Ontario and snow. These are my sister's Ontario mittens. What a pretty design! I didn't actually design it, as a matter of fact. It was inspired by a pair of mittens by a brilliant Swedish Raveler called EvaL8, actually her name is Eva-Lotta and I suspect that if you say "EvaL8" in Swedish it sounds like "Eva-Lotta". Here are her "Svantar" mittens on her blog. 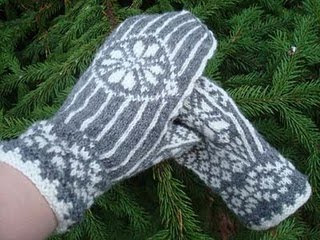 I have to say it again: these mittens are SO WARM! While my sister and I were taking these photos outside my Dad´s house, our poor frozen hands were just about to become gangrenous and fall off. As soon as we put our wondrous mittens on, they were Instantly Toasty. Somehow I have to patent this invention and mass-produce it for arctic crab fishermen and the like. I could make a fortune. And these are the originals. I made the left mitten in Summer 2008! The right mitten I made this December. It's a much better mitten. Having made 2 full pairs since the first one, my technique was much improved. So my poor stepmother gets her left hand fingernails caught in the lining. Luckily she is a classical guitarist (who isn't in this family?) and so left hand fingernails are hardly an issue. The right mitten will leave her nails in perfect playing order. I have much more to blog about my trip to Toronto. I met so many wonderful new friends! I had a crocheter´s holiday, it was awesome. But at the moment my eyes are self-closing from the enormous jet lag which besets me.

Also, my suitcase is still in Heathrow. Meaning, my newly acquired STASH is in Heathrow. I'll have to up my nerve medication to deal with this.

Will blog further tomorrow. For the sake of my readers, I hope my STASH has arrived by then.
Posted by Lara Croft at 12:22 AM 12 comments: